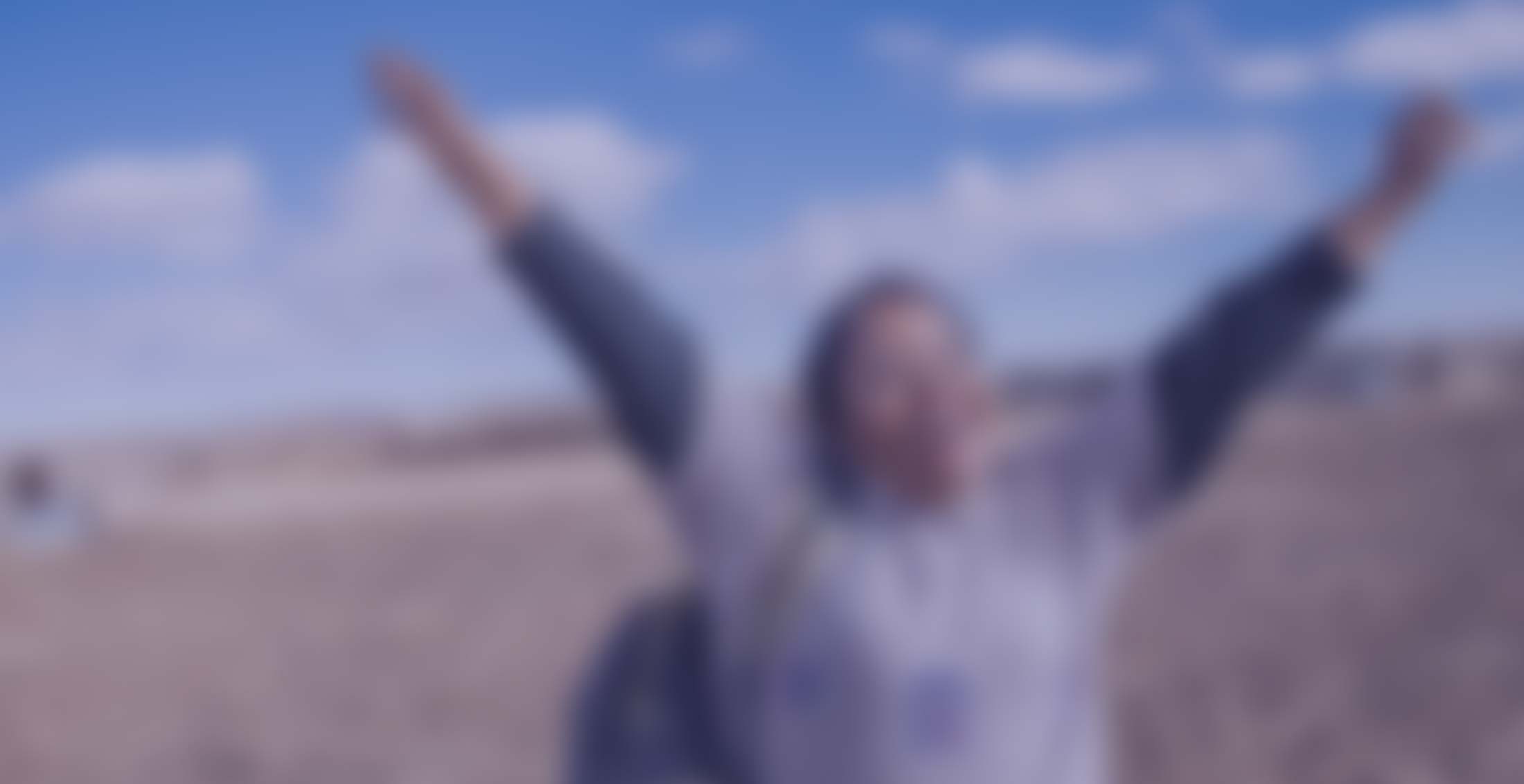 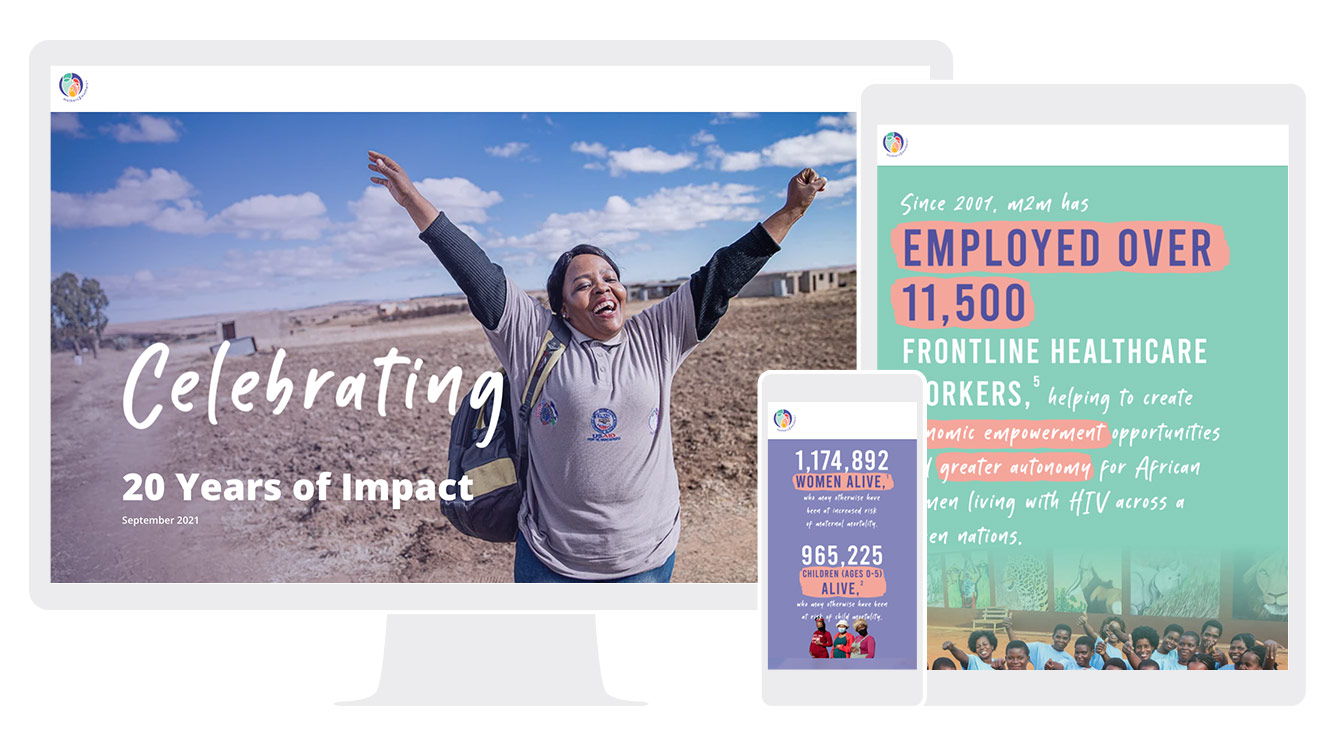 mothers2mothers (m2m) is an African non-profit organisation that unlocks the power of women to eliminate paediatric AIDS and create healthy families. Since 2001, m2m has employed over 11,000 women living with HIV as frontline health workers in sub-Saharan Africa. Together, these women have reached 13.5 million individuals with life-changing health services and education.

We talked to Andrea Hahn, Graphic Designer at m2m, about how the m2m team has used Shorthand to produce their immersive digital annual reports, alongside a growing number of other marketing materials.

m2m’s first use case for Shorthand was to create a digital version of their annual report. Previously, m2m had worked almost exclusively in print, and their annual report had been a document that was physically mailed — or even handed — to donors.

As Andrea explains, “We wanted to see if there was a digital way to showcase our work, so we could reach more people. In the past, we'd print all of these annual reports, and then we'd distribute them when we could.

“But that always presented challenges since they were printed in bulk in Cape Town, and we had to figure out creative ways to get them to our offices in the U.K., U.S., and across Africa—which usually entailed m2m staff hand delivering them when they travelled. We just knew there had to be a better way.”

When deciding on a digital format to pursue, the m2m team considered using PDFs — a common format for annual reports, but one with major limitations. In the end, they found Shorthand to be a much more flexible, functional, accessible, and responsive option.

And their results for mothers2mothers have been stunning. Their 2020 Annual Report, for example, used photography and illustrations to produce a beautiful and engaging digital experience.

Feedback from m2m’s supporters has also been impressive. “Whenever our annual reports come out, people say, ‘This is amazing. It's the best thing we've ever seen.’ We receive so much great feedback on them, which is exciting.”

Following the success of their digital annual reports, the m2m team has branched out to produce a range of additional digital campaigns.

One highlight is 20 years of impact, a gorgeous and informative story celebrating m2m’s twentieth anniversary. Another is Cycle2Zero, an immersive fundraising pack for the m2m community to help with their fundraising efforts.

Andrea is increasingly promoting Shorthand for projects that would otherwise be produced as PDFs.

“Now, as much as possible, we're saying, ‘Why do you need this? A one-pager PDF is so boring. Can we not do that?’ And so, we’re using Shorthand instead. This has helped the wider team see how great Shorthand can be and how great we can make their campaigns look.” 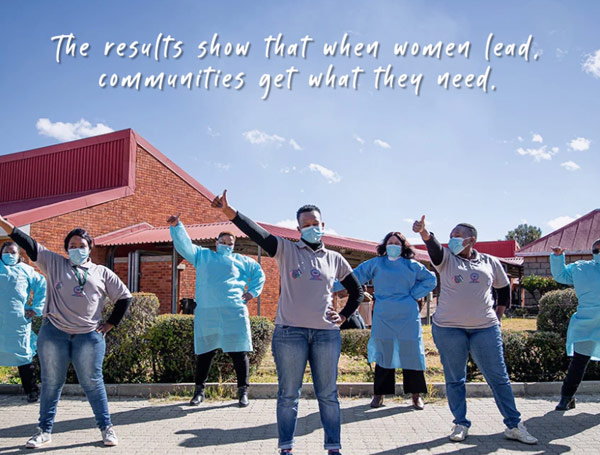 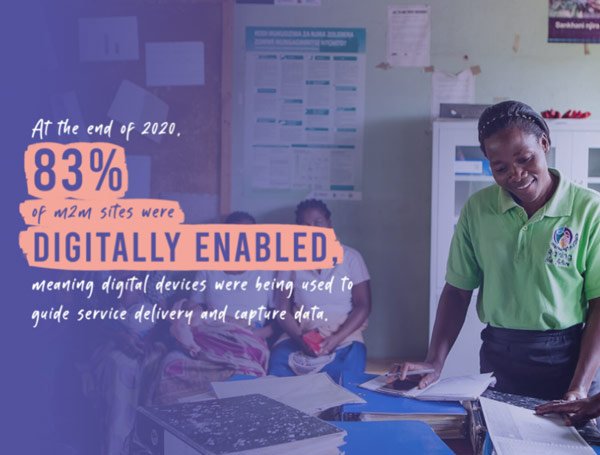 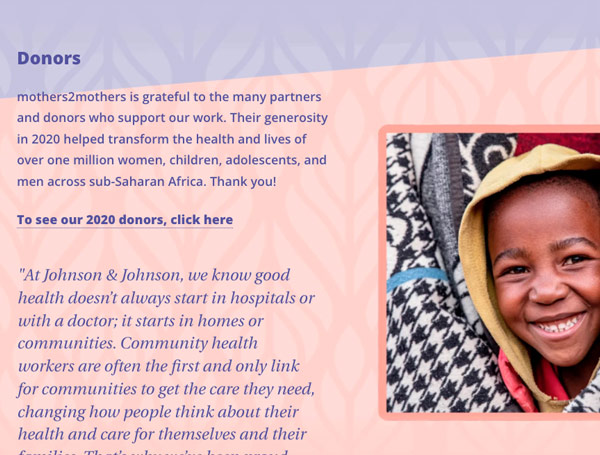 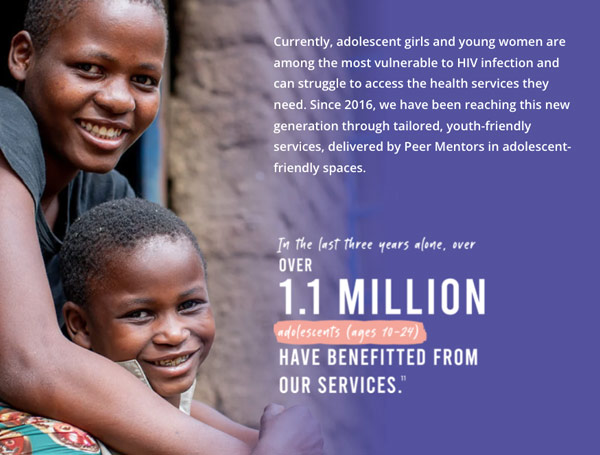 A selection of sections from mothers2mothers' stories

No barrier to entry

When deciding which platform to use, Andrea and the m2m team had two main requirements. First, their annual reports had to look beautiful. “We wanted to keep it as beautiful and as engaging as our printed versions were, which is what we’ve managed with Shorthand,” Andrea says.

Second, their chosen content platform had to be easy to use. “We chose Shorthand because it seemed like it was easy to learn. Many of the other tools were much more complicated, or required more bespoke design and building.

“And since then, we’ve learned a lot more about all the capabilities of Shorthand — but it’s all been easy to learn. We check out Shorthand stories built by others, which gives us inspiration about how we can create our own engaging stories.”

Let’s get it done

Andrea notes that the quality of support has been one of the most important features of Shorthand.

“Shorthand’s support is always really helpful. Basically, the Shorthand team always figures out a way to get the result we need.”

This has enabled Andrea and the team to use Shorthand for more types of content, and has given her the confidence to continue to suggest Shorthand stories instead of PDFs.

“That’s a big reason why we’re so happy to keep working with Shorthand. There's always been help. There’s always been an attitude from Shorthand of, ‘let's get it done, let's find the best way to do it, we'll make a plan.’”

Andrea says she would recommend that all new Shorthand users get in touch with the support team if they run into problems. “I know that if I'm struggling with something, I can email, and the Shorthand team will get back to me with a really helpful solution.”

Ultimately, the m2m team is delighted with the work they build with Shorthand, and they’re proud to show it off to their community. As Andrea explains, communicating such vital work in a manner that captivates audiences, especially donors, is crucial to the m2m’s mission.

“I think Shorthand has been such a creative space for us. We're always proud of the stuff that we create on Shorthand, which is amazing,” Andrea says.